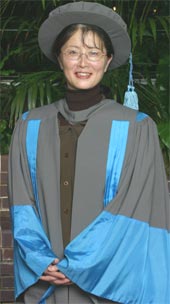 A Kingston University lecturer has completed ground-breaking research into the role of Chinese companies based in Britain.

Miao Zheng, who was awarded a Doctor of Philosophy earlier this year, has examined how Chinese multinationals have adapted to Western business culture. Dr Zheng arrived in the United Kingdom nine years ago on a Chinese Government scholarship speaking little English. Undaunted by the challenge, she completed a Master of Arts in Personnel Management at Kingston University, determined to learn as much as she could about Western business systems. She then promptly set to work on her pioneering research, which included investigating how management of staff at Chinese multinationals was changing.

Head of the University's School of Human Resource Management Professor Christine Edwards said Dr Zheng's research had generated a great deal of interest in the business community. "It is a model for how good human resource management practice in the United Kingdom can be passed on to companies from developing countries," Professor Edwards said.

Dr Zheng was brought up during the Cultural Revolution when China had closed its doors to the Western world. On leaving school, she was sent by the Government to a village and worked in the fields for four years, studying at night by candlelight before finally enrolling at university at the age of 22.
After graduating with a philosophy degree, she worked for the Chinese Government before becoming a lecturer at Nanking University. Now a senior lecturer in international human resources management at Kingston University, she is also responsible for the Business Faculty's overseas students.