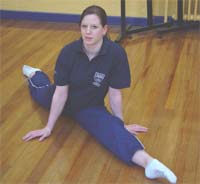 Emma Grisdale won the women's individual competition at Lilleshall despite some fierce competition. The 21 year old clinched gold after scoring the highest points in four events involving a variety of leaps, jumps and acrobatic moves.

"I always knew I was capable of winning but I had to go out there and prove it," Emma said. "I didn't make a mistake right the way through the competition and was thrilled I'd managed to put in such a good all-round performance."

Emma's victory has given her the perfect springboard to represent Great Britain at the World Student Games later this year. "I've already been told that I'm one of the three females likely to go," she said.

However, the British Gymnastics Federation is struggling to raise enough money to send the women's team to the Games in Korea. "It would be a shame if I had to miss out because I feel ready to perform at that level," Emma said. "I'm just keeping my fingers crossed that they can come up with the money in time."

Emma, who is in the first year of her sports science degree, is a member of Kingston University's talented athlete scheme. The programme supports students competing at national and international level by helping them with their travel expenses to events and giving them extra time to complete their studies. University director of sport James Hayter said Emma thoroughly deserved her success. "She has performed superbly in gymnastics since coming to Kingston and it is a credit to her that she has been able to juggle her studies with her training," he said.