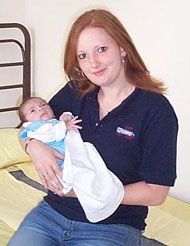 A Kingston University education student who helped save a Romanian hospital from closure says the experience has confirmed her ambition to work with children. Jennifer Edwards, who is in the final year of her primary teaching degree, volunteered to clean up a wing of a paediatric hospital in the town of Bolintin Vale during the summer. The 21-year-old spent nine days in the small town, 30 kilometres east of Bucharest, working for Metropolitan Police charity Convoy 2000, which sends medical aid to Romania.

Jennifer was part of a group of 20 volunteers who took supplies including bedding, clothing and equipment to the hospital ahead of a make-or-break inspection. â€œWhen we got there the building was very run down and the outlook was bleak,â€ she said. â€œWe sanded down the walls and decorated the rooms and managed to prevent the hospital from being shut down.â€

Days later, the medical supplies Jennifer brought with her helped save the life of a four-month-old baby. Named Nikolai by hospital staff, the infant required urgent medical attention after being found abandoned in the street.
â€œThe intravenous equipment and oxygen masks we brought with us helped keep him alive,â€ Jennifer said. â€œIt was an amazing feeling to know I was partly responsible for saving this tiny person.â€

Jennifer received a medal from the townâ€™s mayor for her role keeping the hospital open. â€œIt was a touching gesture and very humbling,â€ she said.
â€œThe people were so grateful, even for basic supplies such as blankets and sheets that we take for granted.â€

Jennifer intends to return to the hospital to work on another ward before she starts her career in the classroom. â€œAlthough I wonâ€™t be saving lives as a teacher, I will continue to get great satisfaction from helping children fulfil their potential,â€ she said.