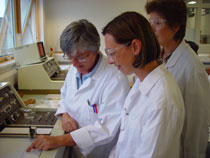 Kingston University was the scene of some impromptu detective work when secondary school teachers descended on its science laboratories to investigate a suspicious death. There was no bloodshed involved though – the incident was actually all part of a mock murder mystery staged at the universityâ€™s annual chemistry in action day.

The workshop gave 18 teachers from schools throughout the country an opportunity to master the latest analytical techniques in the universityâ€™s state-of-the-art laboratories. Principal lecturer Dr Eileen Buckley-Dhoot asked them to solve the case of an unusual death by undertaking a series of forensic tests to establish exactly what had happened. The teachers firstly analysed powder and pills and quickly ruled out an overdose as the cause. Pathology reports indicating the victim had died as a result of toxic shock soon shed more light on the situation. The teachers ran comparative tests on two batches of alcohol and confirmed the victim had drunk some illegal whisky and the case should in fact be treated as manslaughter.

Organised as part of the Department of Trade and Industryâ€™s valid analytical measurement programme, the workshop was staged to help teachers get to grips with skills included in the curriculum. â€œStaff have to teach a range of modern analytical techniques, often without having had the opportunity to gain first hand experience themselves,â€ Dr Buckey-Dhoot explained. â€œThe exercise provided them with an important opportunity to work on some of the advanced equipment that we have at Kingston. They will now be better placed to teach the concepts of analytical science in a way that excites pupils.â€

The chemistry in action day took place in the universityâ€™s new laboratories in the recently opened Eadweard Muybridge building.