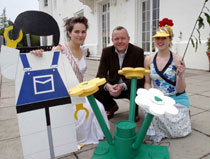 Design students from Kingston University have swapped their books for coloured building bricks in a project commissioned by Legoland.
International toy giant Lego invited second-year students on the Universityâ€™s Product and Furniture Design course to work on a number of design briefs at its Windsor theme park.

The students had six weeks to come up with solutions to challenges outlined by Legolandâ€™s Art and Design Director Justin East, a Kingston Product Design graduate. Around 20 students were invited to present their ideas to a panel of judges, including the Head of All Legoland Parks, Mads Ryder. Petranella Storrs and Sarah Lloyd were joint winners of the Â£500 prize. The pair, both 21, were tasked with finding ways to entertain families queuing for the parkâ€™s rides.

Among their creations was a Lego-man model for children to have their photograph taken with, a giant flower waterwork feature and propeller hats built from Lego. â€œWe remember Lego as being magical and we really wanted to capture the childrenâ€™s imagination,â€ Petranella said. â€œWe suggested attaching pieces of Lego to the surrounding trees at Legoland and then getting children to ask their parents questions like, does Lego really grow on trees?â€

Sarah added that along with a traffic light system designed to control the queue to the parkâ€™s helicopter ride, children could build propeller hats to keep them busy. â€œThe children would buy a pack of Lego from a nearby vendor and make their hats while queuing,â€ she said. â€œNot only would this build up anticipation for the ride, it would also keep the sun off their heads on hot summer days.â€

Senior Lecturer Jakki Dehn said that industrial-based projects were invaluable experience for her students. â€œThese projects really give students the chance to find their specialist niche,â€ she said. â€œPresenting their work to real clients is great preparation for life after university.â€