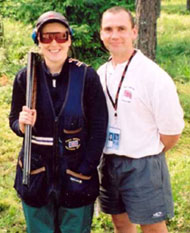 A Kingston University sports psychologist is helping to trigger a new dawn for Great Britainâ€™s shooting team ahead of next yearâ€™s Olympic Games. Sports Science course director Dr Geoff Lovell is one of a team of psychologists working with Britainâ€™s top rifle, pistol and clay target shooters in the build-up to the Games in Athens. Each national shooting federation has to earn its quota of Olympic places by succeeding in a series of events and Dr Lovell has been hired to lend a hand.

Having returned from the recent European Clay Target Championships in the Czech Republic with eight medals, the number of Olympic places won is already the largest in British shooting history. Dr Lovell, who first linked-up with the team in 2001, explained how the shootersâ€™ mental preparation gave them an edge. â€œPulling the trigger and hitting targets is easy but unfortunately we as human beings make it difficult for ourselves,â€ he said. â€œWe get anxious, we concentrate on the wrong things and we put ourselves under pressure. Getting people to learn how to concentrate properly and working on strategies that prevent any negative thoughts creeping in can really help their sporting performance.â€

Dr Lovellâ€™s research has given him an insight into how the brain processes information and an understanding of how athletes can perform at their best. As well as specialising in concentration training and relaxation techniques, he focuses on areas such as coach-athlete communication, team integration and goal-setting. â€œThe best shooters are very single-minded and are not easily distracted from what they want to achieve,â€ he said. â€œStudents on Kingstonâ€™s Sports Science course gain a lot from my experiences because we are able to talk about scenarios I have managed first hand.â€

Dr Lovell is a British Olympic Association registered psychologist and is accredited by the British Association of Sport and Exercise Sciences. He also worked with the disabled Weight Lifting team that won two gold medals at the Sydney Olympics in 2000. â€œThe goal when I first started was to get our shooters to Athens,â€ Dr Lovell said. â€œNow our goal is to win medals – and we will win medals.â€