A group of Kingston University artists has been giving illusionist David Blaine some food for thought during his latest daredevil stunt. The foundation art students visited Blaine, who on Sunday is due to complete the last of his 44 days suspended in a glass cube above Tower Bridge, to work on their class project called Living in a Box. They were tasked with examining the thoughts and feelings Blaine may have been experiencing while confined in his box with no food and then expressing these through art.

During the visit, Head of Foundation Studies Paul Stafford persuaded a security guard to pass a copy of the class project brief to Blaineâ€™s girlfriend, Manon van Gerkan. Van Gerkan held up a message to Blaine on a whiteboard telling him about the project. The students were astonished when Blaine then relayed a message asking them to come back and showcase their finished work. 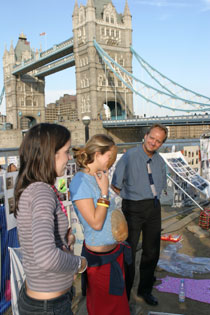 A week later, the students were allowed in to the VIP area at the River Thames site. They treated Blaine to a display of the pieces they had worked on aimed at minimising his fears and phobias. These included a wide-brimmed hat designed to help claustrophobia sufferers by ensuring the wearer never feels crowded. Blaine was so impressed that he passed a note to van Gerkan which read: â€œTell them thank you for making my day even more beautiful.â€

Student Adam Morley, 18, who designed the hat, made a short speech describing his work. â€œThere have been so many negative responses to Blaineâ€™s act that I think he really appreciated our fresh approach,â€ he said. â€œI actually caught his eye and wrote â€˜how are you feeling?â€™ on my pad and he put his thumbs up at me – it was incredible.â€

Hannah Richardson, 22, added that the group had returned to their studies buzzing from their interaction with Blaine. â€œNobody else will ever have the chance to experience what we have,â€ she said. â€œHis girlfriend took all our addresses so weâ€™re hoping that we might be able to take the project a stage further.â€

Mr Stafford admitted that he never expected the field trip to take such a dramatic turn. â€œThe students are extremely lucky to have taken part in an event that will go down in the record books,â€ he said.