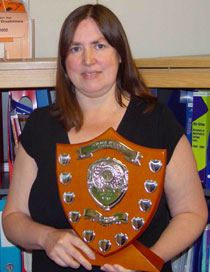 A Careers Service adviser has received national recognition for her work helping students from ethnic minorities get ready for life after University. Alison McGregor has been named National Mentoring Consortium Co-ordinator of the Year after successfully pairing students with role models from the business community.

Alison earned her award after placing 16 students with mentors from leading companies during the past year. Taking part in the six-month scheme enabled the students to improve their personal and professional skills as they worked with their individual mentors to achieve a set of objectives, she said. Organisations such as Barclays Bank, the Home Office and John Lewis were involved in the Kingston scheme. â€œWhere possible, we always try to match students with a company relevant to their career interests,â€ Ms McGregor said. â€œHowever, weâ€™ve found that some of the most successful partnerships have been between employers and students from different backgrounds. The main attraction of the scheme is that it gives students the chance to build confidence.â€