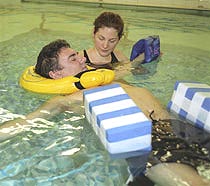 Research completed at the Faculty of Health and Social Care Sciences has uncovered findings challenging some traditional career stereotypes. A two-year study, Ethnicity and Degree Courses in the Allied Health Professions, examined factors that influenced the choice of courses and jobs for people from a range of backgrounds. It also looked at studentsâ€™ perceptions of such careers as physiotherapy, radiography and occupational therapy.

Funded by the South West London Workforce Development Confederation, the project, carried out by Nan Greenwood and Christine Bithell, involved interviews with Year 12, Access and first year university students. More than 650 questionnaires were also completed by respondents who gave their views about eight allied health professions and careers in general.

Although some of the results confirmed the researchersâ€™ suspicions about the reasons school and college students were not considering certain courses, others were not what they had anticipated. â€œIt was not surprising that there was a general lack of awareness about some of the professions concerned, such as orthotics and dietetics,â€ Ms Greenwood said. â€œWhat was more unexpected though was that, despite the fact many people assume students from certain cultural and religious groups would not consider healthcare careers because of concerns about touching patients, such cases were, in fact, rare.â€

The findings showed a scientific career, job with prestige and the opportunity to contribute to society were significantly more important to Black African and Asian participants than to white respondents. â€œThis indicates that to attract ethnic minority students, it is important for the NHS to promote the scientific, problem-solving nature of allied health professions,â€ Ms Greenwood said. She suggested more emphasis could also be put on publicising potential salaries. â€œThis would counter the misconception that these careers have low pay when a consultant physiotherapist, for example, could earn in the vicinity of Â£60,000,â€ she said.

The study also found gender influenced attitudes to careers in the allied health professions and a follow-up study exploring this aspect in more detail is now under way. The researchers expect to feed back findings and recommendations later this year.