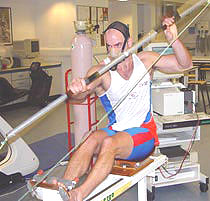 Two of the countryâ€™s leading oarsmen are pushing themselves to the limit at Kingston Universityâ€™s Human Performance Laboratory in the lead-up to this summerâ€™s Olympic Games. Ian Wynne and Paul Darby-Dowman, who are members of the British flatwater kayaking team, have enlisted the help of Life Sciences staff ahead of a make-or-break Olympic qualifier in May.

Senior lecturer in sports science and former Great Britain kayaker Dr Ken Van Someren is heading the team of experts monitoring the athletesâ€™ performance and training progress. Techniques being used included measuring oxygen consumption rates and levels of blood lactate during exercise, he said. â€œWe are looking at blood lactate because it is an indication of lactic acid production in the muscle, which causes fatigue and reduces performance,â€ Dr Van Someren explained. â€œOxygen consumption, meanwhile, reflects the endurance capacity of the athlete – the higher it is the better. If we find overall fitness levels are not as good as they could be, we can recommend changes to their training programme to improve performance.â€

The Human Performance Laboratory in based in the Eadweard Muybridge Building at the University's Penrhyn Road campus and is accredited by the British Association of Sports and Exercise Sciences. Last year the British Olympic Association chose the University as an acclimatisation training centre for athletes preparing for the Games.

Wynne and Darby-Dowman, who have been kayak partners for two years, are confident that, with the Universityâ€™s assistance, they can not only qualify for Athens but mount a successful medal challenge. â€œThe tests we do at Kingston form the basis of our training regime,â€ Wynne said. â€œI will go into the final Olympic qualifying event full of confidence because I know Iâ€™m getting the best support possible.â€ Darby-Dowman believes the facilities available at the University have been invaluable in the duoâ€™s preparations. â€œThe difference between going to Athens and staying at home could be a fraction of a second. The feedback weâ€™re getting from the sports science staff about our fitness levels will maximise our chances,â€ he said.

Both men are already seasoned Olympians. Wynne reached the semi-finals of the individual 500m kayak sprint at the Sydney Olympics in 2000. Darby-Dowman and former teammate Ross Sabberton also made it to the semi-final stages in the team 500m and 1000m events.