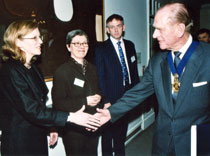 A reader in sustainable design has shared her views about the best ways to reduce the amount of waste generated during product manufacturing with the Duke of Edinburgh. Anne Chick, from the Recycling by Design Research Unit, was asked to prepare Prince Philipâ€™s briefing notes ahead of the Designing Out Waste discussion to mark the 250th anniversary of the Royal Society for Arts (RSA).

Ms Chick, a society fellow, met Prince Philip, who is the president of the RSA, when he chaired one of the charityâ€™s coffee house challenges last month. â€œHe asked me about my role on the day and we talked for just over a minute,â€ she said. â€œI was one of only five fellows chosen to meet him and it was an unforgettable experience.â€

Four Kingston design students and senior researcher Dr Paul Micklethwaite were among an audience of almost 50 people at the hour-long Designing Out Waste discussion. Prince Philip asked Ms Chick to pose a question and open the proceedings to the floor. â€œI asked who the audience thought should be responsible for reducing waste,â€ she said. â€œA company might change the design of a product so that less raw material, energy and water are used in its manufacture. However I believe the consumer can also prevent waste by buying a product that uses fewer resources in its manufacture or working life than an alternative on the market.â€

Audience member Amy Doherty, who is in the third year of her graphic design studies, said Prince Philip appeared well informed about the issues raised. â€œI was virtually sitting next to him and it was amazing to find myself so close to royalty. Although I didnâ€™t get the opportunity to ask any questions myself, I definitely learned a lot,â€ she said.

Being asked to brief Prince Philip showed the high regard in which the Universityâ€™s Faculty of Art, Design and Music was held, Ms Chick said. â€œTo be given an audience with royalty is wonderful recognition of Kingstonâ€™s achievements in sustainable design research,â€ she added.