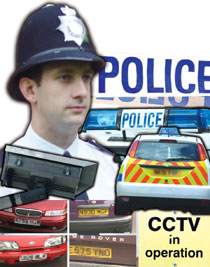 Kingston University is heading a major investigation that could help police officers solve crime more quickly. Experts from Kingstonâ€™s Digital Imaging Research Centre have joined forces with Surrey University and independent research organisation Sira for a project called REVEAL (Recovering Evidence from Video by Fusing Video Evidence Thesaurus and Video Meta-Data). The partners have been jointly awarded Â£390,000 from the Engineering and Physical Sciences Research Council (EPSRC) to find ways to cut the time it takes officers to examine CCTV footage of a crime scene.

Kingston University has received Â£209,000 for its role in the venture, which is geared to meet the requirements of the Police Information Technology Organisation and Police Scientific Development Branch. During the next three years, the project team hopes to develop a system that will automatically extract and record evidence from CCTV footage. CCTV played a central role in identifying individuals and vehicles involved, Director of Kingstonâ€™s Digital Imaging Research Centre Dr Graeme Jones said.

With input from imaging specialists Sira, Dr Jones and his Kingston University colleague Professor Tim Ellis hope to produce a surveillance system that will automatically generate a gallery of suspectsâ€™ pictures and vehicle number plates for all moving objects in the footage. The technology would find the clearest image of a person or vehicle and track their movement, even predicting their position when out of the cameraâ€™s range. â€œIt will be used by police forces to automatically generate a list of suspects so officers can decide whether they have anything to do with a crime,â€ Dr Jones explained. â€œFor example, in the case of a car break-in, there might be a description of a suspect wearing red trousers and an approximate time the incident took place. By inputting these details into a computer, officers will be able to pull off a report of all cameras which have recorded this.â€

Dr Jones said the project was designed to meet the Home Officeâ€™s five-year strategic framework to ensure the police service was equipped to exploit opportunities to science and technology to deliver effective law enforcement. â€œGathering this evidence can involve committing many officers to the extremely time-consuming process of manually recording what is happening in available CCTV archives. It can currently take up to four hours to mark up one hour of footage. Therefore, any technology for recovering intelligence automatically from video footage is a priority for development of the policeâ€™s evidence-gathering capabilities. Such advanced technology will free up officers, allowing investigation teams to be more effective at solving crimes,â€ he said.

Surrey Universityâ€™s Centre for Knowledge Management is producing a Visual Evidence Thesaurus which will be integrated into Kingston Universityâ€™s surveillance model. The centre will take video surveillance documents and, together with interview transcripts of experts commenting on CCTV tapes, use this to build a model of related terminology. The partners expect that all this evidence will be capable of entry into HOLMES 2, the investigation management system used by police forces to collect, manage and analyse intelligence data.