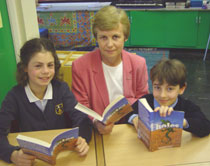 A lecturer from the School of Education has taken her expertise in childrenâ€™s literature back into the classroom. Liz Broad, Deputy Director of the Postgraduate Certificate in Education (Primary) programme, has been working with the same class at Bishop Gilpin School in Wimbledon for the past seven years on a range of literary projects. She first linked up with the children, now aged 10 and 11, to help them learn to read when they were in reception class.

Lately Liz, who is a governor at the school, has been developing ideas for text-based study in response to the Department for Education and Skillsâ€™ Excellence and Enjoyment strategy. The initiative allows primary schools to take control of their own curriculum and become more innovative. Last year, her pupils studied the structure of fairy tales before writing their own. Their efforts were read and reviewed by children in Year 1. â€œThe idea was to motivate those pupils who donâ€™t usually want to express themselves through writing. Because their stories were going to be read by the infants, they knew they had an audience and a purpose to write,â€ Liz explained.

Last term, the Year 6 pupils studied the story, Holes, by Louis Sachar. With a film version of the book released last autumn, the class explored how the plot and its characters have been translated on to the big screen. â€œUsing a variety of story and word games, they drew evidence from the text to support their arguments. Between sessions, I encouraged the pupils to stick post-it notes on a board to tell me what they wanted to discuss,â€ Liz said.

Although her budding bookworms will now move on to secondary school, Liz is planning to cultivate another set of junior reading enthusiasts from September. â€œThe project has shown that it is possible to connect with pupils who previously havenâ€™t show an interest in reading and writing. It has also given me an opportunity to reflect on current teaching practice and take this experience back to share with my students at the School of Education,â€ she said.