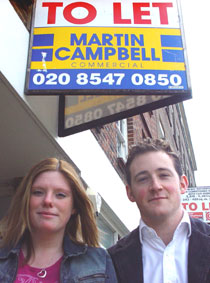 Surveying students from Kingston University have been pronounced among the best in Europe after carrying off top honours in a prestigious international competition. Six final year real estate management students lined up alongside counterparts from Denmark, Holland and Poland for the European Real Estate Challenge. Backed by the Royal Institution of Chartered Surveyors, the contest saw the students come to the rescue of a fictitious multinational finance company eager to relocate its European operations to a major city.

Assuming the role of commercial property consultants to General Power Financial Services, seven teams with members from five different European educational institutions set to work. At an initial conference in Copenhagen last September each group was given a city in which to find suitable head office space. The teams were then given four months to gather information about the companyâ€™s requirements and the location itself. The project included a visit to allocated cities to inspect possible sites and discuss proposed locations with real estate agents. It also involved weekly team meetings staged with the help of the web-based Blackboard learning management system.

In January, the students presented their final recommendations to judges posing as the companyâ€™s board of directors. The top three teams, which all included Kingston students, then tackled the task of selling their proposals to an international panel of real estate experts.

Kingston students Kate Flaherty and James Duck, whose research took them to Copenhagen, were part of the winning team. â€œThe main point we had to consider was the companyâ€™s need for a round-the-clock working environment with scope for expansion,â€ Kate said. â€œWe were asked to find a prestigious building, but not one that customers might think the business had spent all their money buying. We worked with students from Eindhoven and Warsaw and graded each building we saw on how closely it matched the specifications.â€

Course director Tim Bennett, who oversaw the challenge, said it had given the students the opportunity to work to a realistic client brief. â€œMany property consultancies which employ our graduates are multinational firms with a worldwide business remit. Understanding the process used by such organisations to select office buildings will be an immense asset to the students along with the inter-cultural communication skills they have acquired along the way,â€ he said.