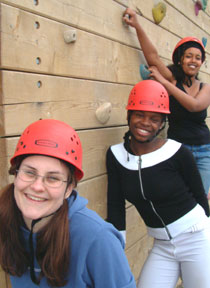 Daring teenagers from South London built a bridge to a life in higher education during an action-packed weekend away from the capital. Year 10 pupils from schools in Wandsworth and Croydon got to grips with activities such as abseiling, climbing and orienteering at last monthâ€™s Engineering Summer School, run by the Universityâ€™s widening participation team and the Faculty of Technology. The 20 teenagers, aged 14 and 15, teamed up with Kingston students for a guided tour of the Roehampton Vale campus before heading to an outdoor activity centre in Kidderminster.

Widening participation co-ordinator Jayne Clanfield said the summer school, supported by the European Social Fund, had helped promote university to potential school and college leavers who might not otherwise consider signing up for a degree. â€œAlthough the pupils involved wonâ€™t apply to university for at least another three years, we wanted to press home the importance of achieving good GCSE grades,â€ she said. â€œBy giving them a glimpse of the Universityâ€™s facilities, we also opened the door for them to explore careers they might not have previously contemplated. They had a lot of fun taking part in our programme of engineering-related activities, including bridge building, and we hope the experience will encourage them to keep on with their studies.â€

Asmayt Tekalehaymanot, a pupil at Southfields Community College, credited the event with giving her the incentive to progress on to higher education. â€œI was really curious about university life beforehand and I was amazed by the facilities I saw when I looked around the campus at Roehampton Vale. I now have a far better idea about what I want to do with my life,â€ she said.

Third year drama with psychology undergraduate Anna MacShane, who was one of the students on hand to answer questions, observed a big increase in the pupilsâ€™ self-confidence. â€œMany of them had preconceived ideas about university and I was able to help them shake off any doubts they may have had,â€ she said. â€œGiving them the chance to interact with other young people from different schools was a great taster for what lies in store in their first year.â€