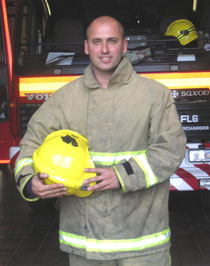 A firefighter who has spent the past three years studying by day and tackling blazes at night has picked up first class honours on the Kingston University science degree he applied to through Clearing. Phil Purdie has just found out he has scooped top marks on Kingstonâ€™s BSc (Hons) in Earth and Planetary Sciences while working shifts for Surrey Fire and Rescue Service in Esher. The 35 year old from Guildford was accepted on to the degree after making a late application through Clearing – the process through which universities invite potential students to apply for the few remaining spots on their courses.

Philâ€™s fascination with how the earth and planets work prompted him to sign up for the degree. â€œEver since I was a child Iâ€™ve been intrigued by the solar system,â€ he said. â€œI really enjoy being a firefighter but I also love to study. I decided that I wanted to go back to the classroom and experience an interactive environment where I could ask questions and bounce ideas off my coursemates. I searched the internet for astronomy courses and found Kingstonâ€™s earth and planetary sciences degree, which also covered geology, physics and radiation. I couldnâ€™t believe my luck – Kingston was my local university. I was really eager to join the course but, because I didnâ€™t apply until the middle of August, I was worried about whether Iâ€™d left it too late,â€ he said.

As Phil discovered, August is not too late to find the perfect course. This year the university will open its Clearing hotline as soon as A-level results are announced on August 19 and Phil urges students to plan ahead now. â€œI found the Clearing hotline number on Kingstonâ€™s website and, because I knew which degree I wanted to do, was put straight through to the admissions tutor. Within a short time I was accepted on to the course,â€ he said. â€œStudying at Kingston is one of the best decisions Iâ€™ve ever made and the support Iâ€™ve had from my colleagues at the fire station has been incredible. If there are other people out there in my position who have a burning ambition to study, I would definitely encourage them to act on that. Itâ€™s been an amazing three years – I could be learning about volcanoes and plate tectonics in the afternoon, then pulling somebody out of a house fire at night.â€

Phil became a firefighter at the age of 27, inspired by a conversation with his twin brother, Andy, who is also with the Fire Service. â€œAndy told me how he had attended a house blaze in the morning and cut a family out of a wrecked car in the afternoon,â€ he said. â€œIt struck me that he was doing something really worthwhile.â€ His Kingston qualification gives Phil the perfect platform to move on to more studies specialising in radiation and environmental protection. â€œItâ€™s a Government requirement that every Fire and Rescue Service must be capable of handling chemical, biological, radiological and nuclear incidents,â€ he said. â€œOur watch could be needed to deal with a dirty bomb or similar terrorist act which poses an imminent radiation threat to the public. I want to have the skills which would allow me to be the specialist officer in that situation. The Fire Service is keen to tap into my knowledge, which would enhance my chances to move up the career ladder.â€