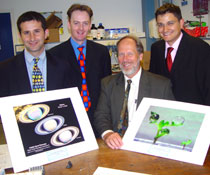 Two Kingston University scientists have linked up with NASA in the first ever collaboration on space medicine between the United Kingdom and the United States. The $US1 million project aims to explore ways to protect astronauts from space radiation in preparation for a manned mission to Mars. Drs Colin McGuckin and Nico Forraz, from the School of Life Sciences, are due to fly out to NASAâ€™s Johnson Space Centre in Houston later this year to begin a series of experiments that could also have significant health benefits back on Earth.

The researchers first met NASA officials at an international conference in San Francisco last year and representatives from the agency visited the University during the summer. NASA is particularly keen to tap into the expertise the scientists have gained from studying victims of the Chernobyl nuclear disaster since affected by cancer. â€œRadiation can destroy cells in the body that naturally defend it against illnesses such as cancer,â€ Dr McGuckin explained. â€œFrom our previous research, we know these anti-cancer cells are common in blood from umbilical cords, which are usually discarded after babies are born. Using NASAâ€™s advanced bioreactors and cell culture processes, we plan to work on ways to increase the bodyâ€™s natural cancer destroyers.â€

Dr McGuckin said the advances could lead to the provision of partial liver transplants within five years. â€œNASAâ€™s microgravity analogue bioreactors and advanced bioreactors can actually speed up the growth of liver cells and form a larger tissue mass, which could then be transplanted into the human body,â€ he said. â€œWithin the next 20 years, there is also the potential to grow nerve pathways to repair brain damage caused by Alzheimerâ€™s disease or spine injuries.â€

The project has also attracted backing from the British Government. The Department of Trade and Industry will fund the Kingston researchersâ€™ travel to the Johnson Space Centre and cover expenses incurred during their stay.