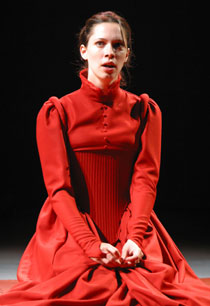 University Chancellor Sir Peter Hall has made his debut as director of Kingstonâ€™s new theatre a family affair. His daughter, Rebecca, plays one of the leading roles in Shakespeareâ€™s As You Like It, which opened at the Rose of Kingston theatre late last month. She stars as Rosalind in the Theatre Royal Bath production, which runs until December 18 before returning to the United States.

Although funding is still being raised to complete the theatreâ€™s interior, the venue can accommodate audiences of up to 700 people at each show. Sir Peter said he hoped the production would provide a flavour of the theatreâ€™s true potential. â€œIt gives us a wonderful opportunity to show the world what Rose of Kingston will be capable of when it is fully fitted out – that we can indeed be at the forefront of staging classical theatre at the highest level,â€ he said.

The production is part of the Rose of Kingstonâ€™s In The Raw season. Tickets are available from the box office on 0870 890 6004 or at www.kingstontheatre.org.