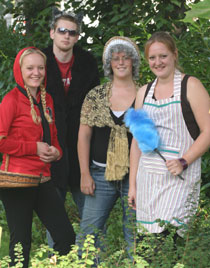 An adaptation of Little Red Riding Hood, the play was performed to seven and eight year olds at The Mount, King Athelstan, Moor Lane and Robin Hood Primary Schools earlier this year. It was one of 15 university or college projects to be shortlisted for the award. The winners were announced in a special ceremony at Twickenham Rugby Stadium today.

The play was written by KUSU volunteer co-ordinator Catherine Attridge, who also starred in the drama alongside student volunteers Alice Buchanan, Anna Jennings and Matt Wilson. â€œThe plot follows the traditional storyline but includes modern day scenarios that children can relate to,â€ Catherine explained. â€œRed is supposed to go straight to her grannyâ€™s house after school but gets distracted listening to music and playing computer games with a friend. She leaves after dark and takes a shortcut through the woods where she meets a wolf who befriends her with the promise of tickets to a music concert. At that point the action stops and the pupils are asked to think about what Red should do to stay safe, which helps them understand the potential dangers of talking to strangers.â€

A qualified drama teacher, Catherine believes it is important to educate young people about how to take care of themselves and empower them to be responsible for their own safety. â€œDrama is an effective learning tool because it can be a lot of fun while at the same time getting across key messages,â€ she said. â€œKUSU volunteers have been involved in a number of other community projects, including painting playground murals and teaching information technology skills to the elderly. Itâ€™s fantastic to have our hard work recognised in this way.â€