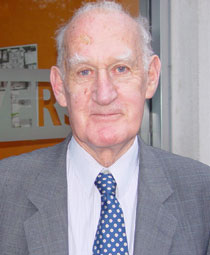 One of Nelson Mandelaâ€™s closest confidants has given an insight into his friendship with the former South African leader during a visit to Kingston University. Anthony Sampson, author of Mandelaâ€™s official biography, was at the University to deliver a lecture on contemporary politics and history organised by the Faculty of Arts and Social Sciences.

A former assistant editor at The Observer, Mr Sampson was asked to write Mandelaâ€™s official biography almost 50 years after their paths first crossed in Johannesburg. The pair met in 1951 when Mr Sampson was editor of leading black periodical Drum. â€œI spent a lot of time in the townships and established ties with prominent political figures such as Mandela,â€ he said. â€œHe was a young revolutionary battling apartheid and I was just starting out as a journalist. Initially I found him difficult to relate to and quite arrogant, but, as I earned his trust, we became great friends.â€

Mr Sampson advised Mandela on the speech he made when he was sentenced to life imprisonment in 1961 for his planned campaign of guerrilla activity against the white regime. â€œDuring the trial, I clenched my fist to show my support for Mandela and was removed from the court,â€ Mr Sampson recalled. â€œHis lawyer approached me outside and said Mandela wanted me to look at the speech he had prepared. He knew he was going to prison for a long time. It was extraordinary to be asked for my opinion on a speech that would go down in political history.â€

In 1990, Mandela was released after 27 years on Robben Island and was inaugurated as the first democratically-elected President of South Africa four years later. His retirement from public life in 1999 coincided with the release of Mr Sampsonâ€™s book, Mandela: The Authorised Biography. â€œIt was a privilege to be asked to write the book. I was given full access to Mandela, his personal papers, his friends and political associates,â€ Mr Sampson said. â€œWhen I met him again he was a different person. The earlier arrogance had subsided and he was much more philosophical. In many ways I believe all those years in prison played a pivotal part in his political development.â€