Geologist warms up for Antarctic expedition

Geologist warms up for Antarctic expedition 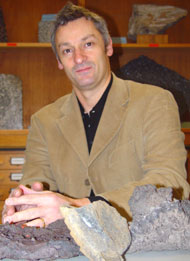 It wonâ€™t quite be a white Christmas for Professor Nick Petford, but the Kingston University geologist will see in the New Year in sub-zero temperatures. Professor Petford, from the Centre for Earth and Environmental Science Research, flies out to Antarctica on December 27 to investigate the interiors of volcanoes. He has been selected as one of only 25 participants from around the world to take part in a month-long expedition to the remote McMurdo Dry Valleys region.

Although volcanoes could be studied first hand when they erupted, Professor Petford said that knowledge of their deeper interiors was limited. â€œThe Dry Valleys region offers perhaps the most exposed magmatic system on Earth and will allow us to examine how volcanoes actually develop,â€ he said. In particular, the geologists will study the composition and fossilised flow of the magma.

The project, led by Johns Hopkins University in Baltimore, has received $US400,000 funding from United States government agency the National Science Foundation.