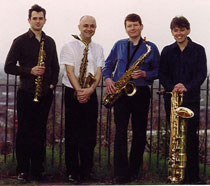 Members of the Universityâ€™s new ensemble-in-residence are keeping their ears to the ground in their search for rising young musical talent. The Delta Saxophone Quartet is keen to work with students to create and record compositions at Kingstonâ€™s Coombehurst Studio. The quartet, which this year celebrates its 20th anniversary, is planning to run a series of workshops and masterclasses as well as several concerts during its residency.

Founder member Chris Caldwell said he was looking to forward to increasing studentsâ€™ awareness of the merits of British contemporary music. â€œThe perception of classical musicians is that we are long in the tooth without any fresh ideas,â€ Mr Caldwell said. â€œWe now have an opportunity to show tomorrowâ€™s performers how we work and Iâ€™m hoping our enthusiasm will rub off on them.â€

The quartet is inviting undergraduate music students and postgraduates completing Kingstonâ€™s MA in Composing for Film and Television course to write pieces for it to perform. It will also coach the Universityâ€™s Big Band. â€œWe will be encouraging the students to explore improvisation and to take their ideas to a new level,â€ Mr Caldwell said. â€œWe will also be asking them to form their own groups and play in the local community, with dates at the Kingston Spring Arts Festival already planned.â€

Head of the School of Music Professor Stephen Arnold said the appointment would help students fulfil their potential. â€œWe are very excited about working closely with the quartet,â€ he said. â€œIt is an adventurous
group which covers an enormous range of musical styles and genres. Its performances are electrifying and the membersâ€™ positive approach is bound to bring out the best in everyone at the School.â€