Chaplain settles in on campus

Chaplain settles in on campus 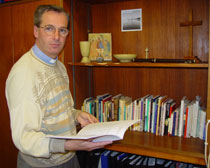 The Universityâ€™s new ecumenical chaplain is looking forward to helping staff and students explore their spirituality. Reverend Stan Brown, who took up his position at the start of September, is equally excited about celebrating the diversity of faiths, cultures and beliefs within the University community.

Reverend Brown, who is based at Kenry House, is no stranger to campus life. He gained a Degree in Philosophy and Theology at Leeds and an MA in Theology at Birmingham. He also trained for the Methodist ministry at Queenâ€™s College in Birmingham. Since that time, he has been based at churches in Newcastle upon Tyne, Halifax and, most recently, Ewell.

Returning to university, albeit in a different capacity to his student days, had fulfilled a long-standing ambition, Reverend Brown said. â€œAfter 18 years as a minister in a church, I wanted to represent Christianity in a place other than a parish,â€ he said. â€œBeing a strong believer in teaching and learning, working in a university chaplaincy is something to which Iâ€™ve always aspired.â€

One of Reverend Brownâ€™s main objectives is to examine spirituality. â€œPeople may have little interest in organised religion but that doesnâ€™t mean theyâ€™re not aware of something greater than themselves,â€ he said. â€œThere is a need to look at who we are and why weâ€™re here.â€ Embracing the broad spectrum of cultures and faiths at the University is also important to him. â€œI want to open up the lines of communication between staff and students from all backgrounds so we celebrate the diversity of our community,â€ he said.