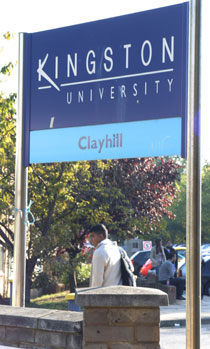 Hundreds of first year students are making themselves at home following a Â£15 million upgrade at one of Kingstonâ€™s Halls of Residence. The Universityâ€™s hall in Clayhill, Surbiton, has undergone a complete transformation since work began in May 2002. Contractors Balfour Beatty are expected to move off site shortly.

Following the revamp, the number of rooms has increased from 650 to 713, with each block made up of three flats consisting of four rooms with ensuite facilities. Some cater for students with hearing and visual impairments and one has been adapted for a wheelchair user.

Project manager Phil Sharman said the original complex, built by Kingston Council in the 1970s, had become expensive to maintain and badly in need of renovation. â€œThese days students are generally seeking better quality accommodation with ensuite facilities,â€ he said. â€œClayhill is now as good a hall as any offered in the United Kingdom.â€

Each upgraded flat has its own boiler, an advanced hot water system and thermostatically controlled radiators, while all windows have been doubled glazed. The kitchens have been fitted with new appliances and residents are able to relax in a refurbished common room. Pool tables, table tennis, table football and satellite television are among the leisure facilities available along with two computer terminals provided for internet access.

Clayhill residents can also look forward to the site, now being run by the Grosvenor House Group, becoming a lot greener. A new lawn and shrubs will improve the appearance of the grounds.

History student Bruk Mellese, 18, is full of praise for his new home. â€œBecause there are only three other students in my flat Iâ€™ve got to know everyone really quickly and thatâ€™s helped me settle in. Iâ€™m really pleased to be living at Clayhill,â€ he said.