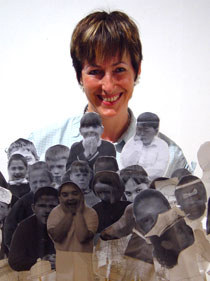 Almost 90 schoolchildren packed into the Universityâ€™s Stanley Picker Gallery recently for a screening of short films produced as part of its Primary Schoolsâ€™ Outreach Project. Pupils from The Mount, King Athelstan and St Johnâ€™s Primary Schools spent four weeks creating their own puppet-style animations using images of themselves set against a 1920s backdrop.

As part of the project, the nine and 10 years olds learned how silent movies were developed by early 20th Century animators, film-makers and actors without the use of colour or sound. Led by professional artist Emma-Jayne Taylor and assisted by second year illustration student Matt Latchford, the children prepared storyboards before making simple props for their films. Classic movies from the silent era and early cartoons, such as Betty Boop, were screened at workshops at each participating school to provide inspiration.

Gallery administrator Jackie Thomas developed the project with support from the Universityâ€™s Widening Participation Unit. â€œChildren are exposed to colour and sound on a daily basis but not many of them would have seen black and white silent movies before. Working alongside a professional artist, they really enjoyed thinking about alternative forms of communication and their reaction to the screening of their films was a joy to see,â€ she said.