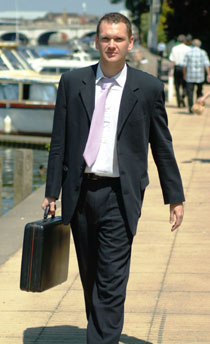 Kingston University has made two successful bids for Government funding, raising more than Â£3 million to provide targeted enterprise support both locally and across West London. The awards were made from the Higher Education Innovation Fund (HEIF), which was set up as part of the Governmentâ€™s drive to stimulate new business ventures and increase prosperity. These awards are significant since HEIF is likely to provide a permanent third stream of funding for universities, alongside teaching and research.

During the past seven years, a number of Kingston academics have worked together to build the Universityâ€™s reputation for knowledge transfer and business support. The Universityâ€™s Enterprise Exchange emerged out of this activity and has led to several million in grants and a string of industry accolades. The first HEIF application was a Kingston-only bid for Â£440,000 and was to further develop these Enterprise Exchange activities. The second was a collaborative bid with six other higher education institutions for Â£10.6 million. The partnership, called WestFocus, received the second highest award in the country, with the Kingston element totalling Â£2.7 million. Kingston also received funding to lead one of 22 centres of knowledge exchange activity across Britain.

Kingston Universityâ€™s Enterprise Exchange work has been led by the Director of Enterprise (Knowledge Transfer), Marguerite Lipscomb. This was a significant factor in the success of both Kingston HEIF bids which were co-authored by Ms Lipscomb and Director of Enterprise (Innovation) Dr David Stokes. â€œWe knew we had a good chance of being awarded the money if were able to encapsulate on paper the range of high-impact projects we had developed and implemented during the past few years,â€ Ms Lipscomb said.

Pro Vice-Chancellor for Enterprise Professor Andrew Self said the national economy had traditionally suffered from a lack of business entrepreneur skills. The HEIF fund aimed to address this. â€œThe UK produces plenty of inventors, but they donâ€™t possess the business know-how to turn incredible ideas into credible products,â€ he said. â€œAccording to the Department of Trade and Industry reports, companies that have worked with Kingston University report an average increase in turnover of more than 40 per cent. With this funding, we can expand our support so many more businesses locally can reap those benefits.â€