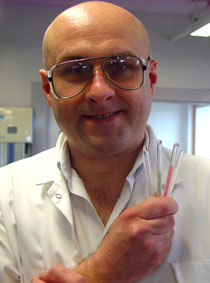 Enlightening research by a University scientist could pave the way for the next generation of wonder gadgets. Dr Roman Kresinski, from the School of Chemical and Pharmaceutical Sciences, is exploiting a group of metalsâ€™ ability to change colour when exposed to different light sources. The technique he has developed could be applied when designing smart television screens, mobile phone displays and windows that exclude sunlight.

Dr Kresinski has been researching lanthanide metals, which are dug out of the ground as ores, for the past seven years and testing their fluorescent properties in the Universityâ€™s laboratories in the Eadweard Muybridge building. â€œThe metalsâ€™ salts absorb light, using some of the photonâ€™s energy in the process, before re-emitting that energy as light in a different colour. Some lanthanides absorb ultraviolet light, which means they glow when artificial lights are switched on or even change colour when moved around the room,â€ he said.

The research has also uncovered a way to attach various lanthanides to a polymer which could be moulded into a plastic. â€œWith further funding, Iâ€™m hoping to introduce some of these energy-trapping properties into optical materials,â€ Dr Kresinki said.