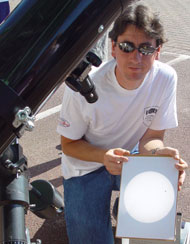 Staff in the Universityâ€™s School of Earth Sciences and Geography witnessed a once-in-a-lifetime astronomical phenomenon today when the planet Venus crossed the face of the Sun. Seen as a tiny black disc, Venus took six hours to complete its first transit across the Sun since 1882.

Using a state-of-the-art reflecting telescope, Dr Stuart Downward and Professor John Grocott projected the Sunâ€™s image and the shadow of Venus on to a white sheet of card. Onlookers gathered in the Sopwith Building car park at the Penrhyn Road campus from 6.20am.

The event was viewed from the United Kingdom and Europe, as well as most of Asia and Africa. The next transit visible from Britain will not be until 2247. â€œAfter the early morning haze cleared, we couldnâ€™t have hoped for a better day to observe this rare occurrence,â€ Dr Downward said. â€œThe reason is it so rare is that orbits of Venus and the Earth do not lie in the same plane and a transit can only occur if both planets and the Sun are situated exactly on one line. It was great to see so many people turn up throughout the day.â€