Nurses step back in time

Nurses step back in time 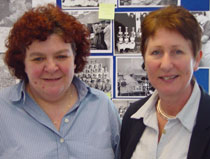 More than 100 nurses have been recalling life on the wards at St Georgeâ€™s Hospital in a major operation to build an archive of 20th Century medical memoirs. The oral history project, being run by staff from the Faculty of Health and Social Care Sciences, has led to the compilation of a series of interviews with several generations of nurses. The recordings, which will be transcribed and stored at St Georgeâ€™s Hospital Library, will serve as a resource for historians examining changes in healthcare practice.

Project leaders Sue Hawkins and Carol McCubbin have sourced interviewees from as far afield as Australia, Canada and the United States with help from the St Georgeâ€™s Hospital League of Nurses. Following a successful pilot scheme earlier this year, a team of oral historians has been training St Georgeâ€™s volunteers on the art of quizzing their fellow colleagues. â€œThe advantage of nurses interviewing nurses is they interact to trigger off memories,â€ Ms Hawkins said. â€œThe interviewers cover a number of themes, ranging from what life was like as a student nurse to recollections of working conditions and clinical practice.â€

Along with the taped interviews, each lasting for up to two hours, the project team is building up a collection of other memorabilia such as photographs and letters. They also hope to establish a dedicated website. â€œThe library archive will be open to both historians researching 20th Century developments in nursing and the local community in and around St Georgeâ€™s,â€ Ms McCubbin said. â€œIf we are successful in setting up a website, we really will have an invaluable knowledge resource for nursing education accessible to everyone.â€

Polio patient triumphs against the odds

A hospital visit to see her critically-injured sister following a Second World War bombing raid on the family home proved the catalyst for Jo Dunstoneâ€™s path into nursing. Interviewed for the St Georgeâ€™s Hospital oral history project, Jo recalled that after contracting polio at the age of 16, she was forced to put her career plans on hold while enduring an extended stay in hospital. There she witnessed nursing care first hand and, while recovering from the disease, began helping out around the wards.

The experience prompted Jo to apply to become a nurse. However, because the illness had left her lame, she found herself rejected by a number of hospitals. â€œThat all changed when our local vicar persuaded me to apply to St Georgeâ€™s,â€ Jo, now 73, said. â€œInitially I was told I wouldnâ€™t have enough stamina to become a nurse. I was advised to consider my decision for a year but, if I still wanted to be a nurse after that time, I would be accepted.â€

Jo finally got to fulfil her dream when, at the age of 25, she joined St Georgeâ€™s nursing school in Tooting in January 1956. â€œThe matron said she thought I might not succeed but deserved to be given a chance,â€ she said. â€œMy condition was met with hostility from some senior members of the nursing hierarchy but my peers and patients were supportive. The training was very demanding and I canâ€™t describe the overwhelming sense of achievement I felt when I finally put on my frilly staff nurseâ€™s cap after three years of hard work.â€

Jo left St Georgeâ€™s in 1960 and worked in South Africa, Australia and New Zealand before moving back to England and becoming a qualified nursing tutor. â€œEven now I feel as though I can cope with anything because what I learned during my training prepared me for life. I am so proud of the fact that my success has opened the door for other disabled people to become nurses,â€ she said.