Music to help point the way

Music to help point the way 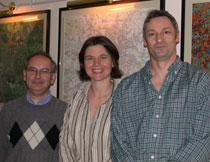 A Kingston University research team is setting to work to produce a musical mapping system for people suffering from visual impairments. Dr Doreen Boyd and Dr Nick Petford, from the School of Earth Sciences and Geography, have joined forces with Professor Kevin Jones, who is based at the School of Music, for the Singing Maps project. They hope to produce a map able to give users a sense of an areaâ€™s geographical features by linking them to different sound features.

The team has received backing from the Copus Grant Scheme, funded by the Office of Science and Technology and the Royal Society, along with an award from the Universityâ€™s Disability Stewardship Fund to explore the best ways of representing the scientific content of maps through sound. Dr Boyd said the final product could be made accessible to visually-impaired people through a computer, with the location of features such as housing and vegetation highlighted by music. The maps would use hyperspectral remote sensing, a method of recording images by satellite, within a geographical information system. â€œWe envisage that as the user selects an area of the map and the pointer rests on any pixel in that image a continuous stream of music will be heard,â€ she explained.

Eight different styles of music will be used, ranging from sounds that are simple and soothing to some that are more complex and unsettling. They will be produced using computer-generated algorithmic composition, which creates sound from a set of pre-programmed instructions. â€œBecause individuals tend to respond to types of music differently depending on cultural influences and taste, users will be able to decide their own match of music for a particular feature,â€ Professor Jones said.

Once completed, the first map will be put to the test during a tour of six major cities. â€œWe need to investigate exactly how potential users might experiment with different sound types,â€ Dr Petford said. â€œWe are also liaising with Ordnance Survey and the Royal National Institute for the Blind to explore the process of map design, production and output to users nationwide.â€