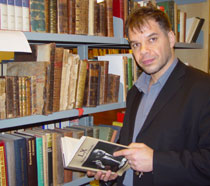 Kingston University has become the holder of one of the countryâ€™s largest collections of books about the Balkans and the Near East. The Vane Ivanovic Library, located next to the main library at Penrhyn Road, boasts almost 6,000 books dating back to the 17th Century.

The collection belonged to political dissident Vane Ivanovic, who dedicated much of his life to the ideal of a united Yugoslavia. Following his death in 1999, the books, which include previously unseen documents on British and Yugoslav foreign affairs preceding the Cold War period, were put into storage in North London. Ivanovicâ€™s son approached Balkans expert Professor Stevan Pavlowitch about taking the collection, who in turn contacted Dr Vassilis Fouskas from Kingstonâ€™s Faculty of Arts and Social Sciences, who is also the founding editor of the Journal of Southern Europe and the Balkans.

â€œSome of the books are worth more than Â£5,000 and they are a priceless asset for our students, particularly those on the MA in International Conflict programme,â€ Dr Fouskas, who is director of the Vane Ivanovic Library, said. â€œThe collection provides a comprehensive source for research into politics in the Balkans and the Near East region during the past 400 years. Once the library is fully operational, we are aiming to become an international centre of excellence in this field.â€

Dr Fouskas is now seeking further funding to develop the collection and hopes to appoint a curator. â€œWe would like to establish a fellowship exchange programme with students from the Balkans who would come to Kingston for a minimum of six months to undertake research. They would return home with advanced knowledge that could help them secure leading positions in their countryâ€™s foreign or economic ministry,â€ he said.