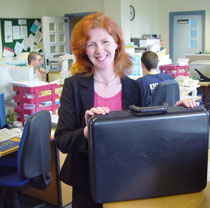 New research at Kingston University could radically improve the lives of worn-out workers in South East England. Experts at the Universityâ€™s Centre for Working Life Research, based at the Kingston Business School, are investigating the feasibility of setting up designated centres across the region so people can work closer to home instead of spending hours commuting to their offices. Their proposed system of remote working would see employees from different companies operate side-by-side, sharing facilities and ideas. They have received Â£100,000 from the South East England Development Agency (SEEDA) for their Healthy Working Centres project, co-financed by the European Social Fund.

Lead researcher Dr Anne Marie McEwan said it was time to reverse the trend of people putting their jobs before their own well-being. â€œMany workers in this country lead very stressful lives which is unhealthy not only for them, but also for their families and the whole economy. The long working day, which has become part of British culture, means some firms are struggling to retain skilled staff and itâ€™s clear working practices need to change. With advanced technology, employees should not have to spend hours commuting to such places as central London when much of their work can be done at home or in their local region,â€ she said.

The research team has sent 3,000 questionnaires to small businesses in South East England to gauge their attitudes to remote working. The companies include financial, telecommunication, pharmaceutical and new media firms. For those businesses which do not allow staff to work away from the office, the survey is designed to find out what assistance would be required to support such a move.

Sole traders have also been targeted to discover whether working on their own makes them feel socially isolated. â€œOne issue associated with remote working is that staff can get cut off and are not able to bounce ideas off colleagues,â€ Dr McEwan said. â€œHealthy working centres would reduce this isolation. We already know that some of the most profitable companies in the world are those that share knowledge and expertise, so this project also has the potential to improve firmsâ€™ productivity.â€

At least 180 companies will participate in a series of workshops and online networks later this year to help the research team determine the best approaches to promoting remote working. The programme will also demonstrate the structural and cultural changes firms would need to adopt to support the new system. The research team will combine its findings with the results of the employersâ€™ survey before making final recommendations to SEEDA in December.