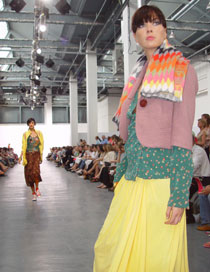 Kingston Universityâ€™s fashion students are hoping that last night's spectacular catwalk parade will catapult them into top jobs in the international clothing world. Executives from firms such as Burberry, MaxMara and Paul Smith lined the front row of the Atlantis Gallery in London to pick out potential trendsetters of the future at the Universityâ€™s annual Fashion Show.

This yearâ€™s show, sponsored by the Dewhirst Group, featured a mix of mens and womenswear, tailoring, knitwear and sportswear. Among the highlights was Mizue Kodaâ€™s womenswear collection inspired by native American dress. Mizueâ€™s designs for a Paul Smith student project are already being worn in her home country Japan. Second-year fashion students also exhibited their latest work on display boards at the Atlantis Gallery. This year Kingston's Fashion Department collaborated on projects with companies such as Paul Smith and Thomas Pink as well as leading fabric manufacturers Gore-tex, Limonta and Lenzing.

Head of Department John McKitterick, an expert in menswear design who has worked for Versace, Levis and Red or Dead, said he was excited about the studentsâ€™ career prospects. â€œThey are already being offered design positions worldwide from an impressive and highly diverse range of fashion houses. This will cement Kingstonâ€™s reputation for helping students achieve their dream of becoming major players in the fashion industry,â€ he said.