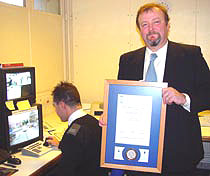 The Universityâ€™s facilities management company has been recognised for the high quality of the security services it provides. KUSCO has won a National Security Inspectorate (NSI) guarding silver medal. The medal is awarded to NSI-approved organisations which comply with British and European standards and meet police and insurer requirements.

KUSCO, which has provided security services for the University for the past six years, received the award late last year following a detailed inspection of its operations. The company was assessed on a range of criteria, including the way it vetted security officers and the standard of assignment instructions given to staff along with its health and safety procedures.

Security manager Tony Patten said the medal was a well-deserved reward for his 40-strong team. â€œThis is the first time we have received such recognition for our hard work and we are very proud. Kingston is one of only three universities in the country to achieve this standard and the award shows we are at the top of our profession,â€ he said.

NSI-approved organisations are inspected regularly and Mr Patten has no intention of letting his team rest on its laurels. â€œThe medal is very difficult to obtain but itâ€™s even harder to retain. Now we have reached this benchmark, we are determined to maintain our service levels,â€ he said.