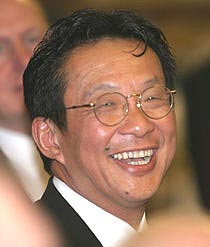 More than 100 former students stepped back in time last month to toast the 60th anniversary of civil engineering courses at Kingston. Their reunion celebrations, organised by the Faculty of Technology and hosted by Vice-Chancellor Professor Peter Scott and Institute of Civil Engineering Vice-President Jean Venables, included a special dinner at the Guildhall.

Guests included alumnus Francis Yeoh, who has become one of Asiaâ€™s leading innovators and entrepreneurs after transforming his fatherâ€™s Malaysian-based firm, YTL, into a major corporation. Specialising in property development, construction and cement manufacturing, YTL is one of the largest companies listed on Kuala Lumpurâ€™s stock exchange.

Associate Dean of Technology Andy Harris said many of the Universityâ€™s other graduates had also gone on to achieve national and international prominence in the industry. â€œThe 60th anniversary celebrations gave them the opportunity to catch up with former colleagues and also see how the School has evolved over the years,â€ he said.

Civil engineering has been taught at Kingston since 1942, when a full-time diploma was introduced by the Universityâ€™s predecessor, Kingston Technical College, to prepare students for Institute of Civil Engineering examinations. The course flourished, enabling many servicemen returning from the Second World War to obtain academic qualifications. In 1949, London University accredited the College as a centre for teaching the BSc(Eng) in Civil, Mechanical, Aeronautical and Electrical Engineering. Six years later, the Institute formally recognised the course.

In 1966, civil engineering became a separate department and moved to a base at Canbury Park Road. After Kingston Polytechnic was granted University status in 1992, the department returned to the Penrhyn Road site where it acquired purpose-built laboratories. In 1999 it became part of the School of Engineering and is now located at the Penrhyn Road and Roehampton Vale campuses.

Aubrey Pengilly never imagined he would be securing a spot in the University history books when he became one of the first students to enrol for a civil engineering course 60 years ago. Originally from New Malden, he signed up for the BSc(Eng) in Civil, Mechanical, Aeronautical and Electrical Engineering when it was launched at Kingston Technical College.

Just a year later, the Second World War brought his course work to a temporary halt. â€œIt was a difficult time to be a student,â€ Mr Pengilly, 79, recalled. â€œThere were air raids and bombs going off everywhere and the wartime shortages made trying to get a degree even harder. I was learning the basic theory of civil engineering and how machines work in a makeshift environment. I can even remember having one lesson in the local Methodist church. Eventually the course had to close, but I finished my degree once the war had ended.â€

Following his studies, Mr Pengilly spent the early part of his career on building sites around the globe before moving to a desk job in the public sector managing civil engineering projects. â€œBeing a civil engineer is a great life if youâ€™re cut out for it – and you can do the maths. Iâ€™m really grateful to Kingston for giving me a thorough grounding in the subject and, ultimately, the ticket for a fulfilling professional life,â€ he said.