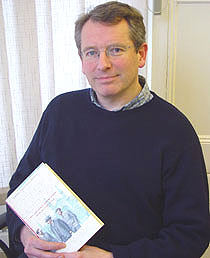 A senior lecturer in journalism is hoping his talent for writing crisp and incisive copy will turn his latest book into a best seller. Former deputy editor of the Independent on Sunday Brian Cathcart has released The Fly in the Cathedral, which tells the story of a group of Cambridge scientists who split the atom in the 1930s. The breakthrough was significant partly because it brought the first laboratory confirmation of Einsteinâ€™s equation E=mcÂ².

Mr Cathcart has written five other books, including The Case of Stephen Lawrence (1999) and Jill Dando: Her Life and Death (2001). The topic of his new book, the title of which is a metaphor for the relative size of the nucleus inside the atom, resulted from an unexpected personal interest. â€œI didnâ€™t study science at school – in fact Iâ€™ve never had a physics lesson in my life,â€ he said. â€œThe mystery of how the atom was split became a fascination after I became a reporter and had to read some nuclear history as background to a story. This book is the culmination of more than 20 years research into the subject.â€

Mr Cathcart teaches on the Universityâ€™s journalism degree programme launched last September and hopes his students will benefit from his experience as both a journalist and an author.