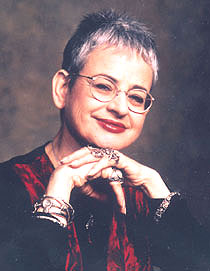 A Kingston University Honorary Graduate has written her way into the record books after being named the countryâ€™s most borrowed author. Childrenâ€™s author Jacqueline Wilson, who became an Honorary Doctor of Education in 2000, has replaced Dame Catherine Cookson at the top of the list compiled by the Public Lending Right. More of the Kingston writerâ€™s books are now borrowed from pubic libraries than those produced by any other author.

Since her first novel, Rickyâ€™s Birthday, was printed in 1972, Jacqueline has had more than 70 novels published, the majority aimed at youngsters aged between eight and 14. She has sold more than 15 million books in the United Kingdom alone and, in June 2002, was given an OBE for services to literature in schools. Latest figures show that her books accounted for two million loans last year. â€œEvery writer is thrilled to know their books are selling, but I know I share with many authors an almost greater thrill when books are loaned from libraries,â€ she said. â€œI virtually lived in Kingston public library when I was growing up and it is heart warming to know that children are now rushing out to borrow my books.â€

The 58 year old brings out two books a year, one for younger and one for older readers, tackling such issues as friendship, young love, bullying, dieting and sibling rivalry. Her best-selling novel, The Story of Tracy Beaker, has been adapted for BBC television. â€œI often write about children who might be considered the odd one out and try to get people to understand why they might look and behave differently,â€ she explained. â€œEssentially, I want children to be nice to each other.â€

A three-time winner of the Childrenâ€™s Book of the Year, Jacquelineâ€™s achievement is all the more remarkable because she has toppled Cookson who has been the countryâ€™s top lending author for the past 17 years. â€œI have a huge amount of respect for Dame Catherine, not only for the quality of her books but because she ploughed a lot of the money she earned back into schools and colleges in the Tyneside area where she grew up. She was a model author and I am proud and privileged to take over her mantle,â€ Jacqueline said.

Jacqueline, who was educated at Latchmere Primary School and Coombe County Secondary School of Girls in Kingston, recently completed a nationwide promotional tour.