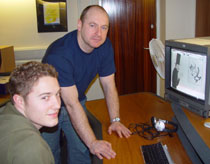 Screen productions developed by final year design students have gone on show at multimedia giant Bloomberg. Twelve short films put together by a group of illustration and animation undergraduates are being shown in the restaurant at the companyâ€™s central London headquarters. Made up of more than 8000 frames, they will run on a continuous loop for three months.

The project got off the ground after Bloomberg representatives heard about the success of illustration and animation graduate Sumito Sakakibara, who last year won a prestigious Royal Television Society National Student Award. They contacted senior lecturer Damian Gascoigne and commissioned his students to come up with a series of one-minute films for a three-screen video wall at the companyâ€™s Finsbury Square offices. As part of their brief, the young designers had to present their storyboard ideas and moving images to a team from Bloomberg. â€œThe companyâ€™s representatives were very impressed by the professional quality of the studentsâ€™ work,â€ Mr Gascoigne said.

Project participant Mark James created an animation depicting the adventures of a cat being pursued by an evil magician. â€œThe fact my work was going to be seen by animators at the top of their profession was a major incentive to do well,â€ the 22 year old said. â€œMy main objective was to find the best way to utilise the three-screen format at the Bloomberg base.â€

Course director Brian Love said the project would improve the studentsâ€™ chances of securing top jobs once they graduated. â€œTheir links with Bloomberg will really strike a chord with potential employers. The project was a fantastic boost for the studentsâ€™ portfolios and they have gained enormous confidence from the whole experience,â€ he said.