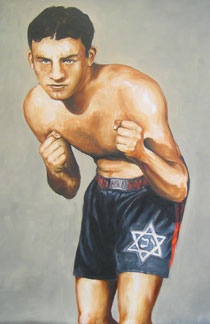 A music expert at Kingston University is hoping to deliver a knockout production after being given the go-ahead to develop a major opera about boxing. Dr Howard Fredrics has been awarded almost Â£5,000 from the Arts and Humanities Research Board to create The Whitechapel Whirlwind, based on the life of 1920s and 30s boxing legend Jack â€œKidâ€ Berg.

Dr Fredrics, creative technology leader at Kingstonâ€™s School of Music, is a distant cousin of Berg. The Jewish boxer from Londonâ€™s East End dominated the world junior welterweight division during his heyday and was nicknamed The Whitechapel Whirlwind. Having collated hours of taped interviews with Berg, fight footage and photographs, Dr Fredrics will use his expertise in electronic composition to produce a multimedia opera. The final product will include video clips and audio segments as well as electronic music and a conventional orchestra.

â€œIâ€™ve researched Bergâ€™s life extensively and spoken with family members, boxing historians and Jewish historical societies to build up a picture of what he was like,â€ Dr Fredrics said. â€œHe had a tremendous career in the boxing ring but after retiring he was determined to remain in the spotlight. Even in his fifties and sixties, he was convinced that some day he would make a comeback and refused to believe that his celebrity years were gone.â€

Dr Fredrics said the opera would explore the reasons so many young men from immigrant communities tried their hand at boxing in the early 20th Century. â€œRegardless of how much punishment he took from his opponent, Berg had a reputation for never giving up. His fighting style is symbolic of his personal battle against anti-Semitic discrimination and also the struggle of all immigrants and minorities at that time,â€ he said.

The research award has allowed Dr Fredrics to appoint librettist Jacob Sager Weinstein. A sneak preview of the opera will be shown at York Hall in Bethnal Green next March as a part of a weekend-long Boxing Extravaganza event, presented by the Jewish East End Celebration Society. Dr Fredrics hopes to have the opera in full production within five years.