Kite set to soar amongst the stars

Kite set to soar amongst the stars 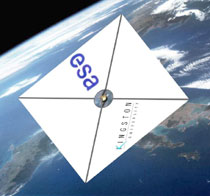 A Kingston astronautics expert is developing a solar-powered spacecraft that could be used for a special voyage of discovery. Principal lecturer Dr Chris Welch from the School of Engineering has been awarded Â£27,000 from the European Space Agency to look into the feasibility of using a solar kite to photograph the moon and asteroids.

For the idea to work, Dr Welch and researcher Colin Jack must design a kite weighing no more than two kilograms. â€œWe are proposing building a prototype from the same material used for space blankets – a thin layer of plastic film with metallic coating which we know will be strong and resistant,â€ Dr Welch said. Based on the same principle as a wind sail, the kite which will measure two metres in diameter, will be propelled by the small amount of pressure generated by the sunâ€™s rays. Although it will travel slowly at first, the sun will cause it to accelerate continuously until it reaches its optimum speed.

Working with leading European aerospace and defence company, EADS Astrium, the project team will also investigate ways to power the kite when it moves into an eclipse. â€œA typical spacecraft would carry batteries to generate energy is such instances. We donâ€™t want to use batteries because of their mass, so weâ€™re exploring ways the sail could â€˜sleepâ€™ while in the dark and reawaken when it moves into the light again,â€ Dr Welch said.

The kites will initially take pictures of objects such as the moon but Dr Welch hopes they could head to Mars within the next 10 years. â€œThe kites are so light they could hover as close as 500 metres above the lunar surface. Spacecraft travelling to Mars could also carry a set of kites, which could be launched in swarms to photograph the Red Planet,â€ he said.

Dr Welch, who estimates the solar kite will cost a fraction of the price of other spacecraft, has now enlisted the help of three final year aerospace engineering and astronautics students to investigate whether it is possible to fold the kites so they can be packed on to rockets.