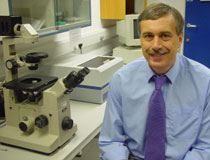 A fresh face has taken up residence in the Deanâ€™s office at the Faculty of Science. Dr David Mackintosh, who previously headed the School of Life Sciences, has been appointed acting Dean. He replaces Professor Reg Davis who has retired from the University after more than 33 yearsâ€™ service.

Dr Mackintosh lists his top priorities as achieving student recruitment targets and boosting research activity. â€œI want to make Kingston the first choice destination for a larger number of high calibre students,â€ he said. â€œTo do that, we need to introduce courses that are academically stimulating and present rewarding career opportunities. Iâ€™m also keen to expand our range of Foundation Degrees, which are an essential part of the Facultyâ€™s commitment to widening participation.â€

Dr Mackintosh is looking forward to overseeing the growth of the recently established Department of Pharmacy, which is expected to achieve full school status by 2006. He is also eager to develop Kingstonâ€™s more traditional strengths. â€œSeveral chemistry departments around the country have closed during the past 12 months but weâ€™re still doing relatively well. The reason we have survived is because we no longer rely solely on single honours degrees in conventional chemistry subjects, which are less popular with students. Instead, we now offer a range of modern combinations, taking in new applications. Itâ€™s vital that we continue to move with the times,â€ he said.

Being chosen to follow in Professor Davisâ€™ footsteps was a real honour, Dr Mackintosh said. â€œAs a result of his dedication, the Faculty possesses a wealth of talented staff who are all pulling in the same direction. I hope to carry on the excellent work Professor Davis was responsible for,â€ he said.

Dr Mackintoshâ€™s promotion has paved the way for another change in the Facultyâ€™s senior management. Dr Alan Seddon has become acting Head of the School of Life Sciences.