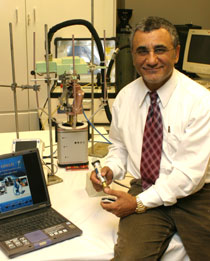 A University research team has invented a robotic technique that could allow doctors to perform ultrasound scans without having to sit next to their patients. Experts from Kingstonâ€™s Mobile Information and Network Technologies Research Centre have spent the past three years developing a system called OTELO, which is capable of mimicking a doctorâ€™s hand movements during an ultrasound examination. Using state-of-the-art communication technology, it is able to transmit live video images back to specialists in a different location so they can make diagnoses. It is expected to be particularly beneficial for patients who do not live within easy reach of medical facilities.

Group leader Professor Robert Istepanian said existing ultrasound techniques were too dependent on specialised skills unavailable in many health centres in the United Kingdom. â€œScans are only performed by highly-trained specialists in major health facilities such as public hospitals and private centres. Ultrasound experts are scarce and not always on hand when needed, especially in the case of patients in rural areas,â€ he said. â€œNo medical knowledge is required to set up the system we have developed, so a junior doctor or student nurse can take it to the patientâ€™s location. Once it is in position, a doctor can use remote control equipment to scan the patient. Images will then be transmitted back to the doctorâ€™s computer by an ISDN line or other wireless technology.â€

Funded by the European Union and supported by Vodafone, the project has been the subject of clinical tests in France, Spain, Italy, Cyprus and Morocco. â€œWe anticipate mobile healthcare systems will become widely used in Europe during the next three years,â€ Professor Istepanian said. Preliminary clinical work is now being undertaken at St Georgeâ€™s Hospital and the researchers hope to test the system at other hospitals in the United Kingdom in the near future.