Animators in spotlight at Muybridge Festival

Animators in spotlight at Muybridge Festival 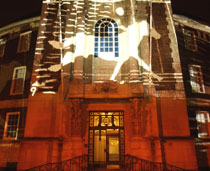 Three design graduates have lit up Kingston with some of their latest work as part of celebrations to mark the life of the man renowned as the father of the moving picture. A giant projection, created by Paddy Molloy, Thomas Hicks and Hannah Truran, was beamed on to the exterior of Kingstonâ€™s Guildhall last month as part of a festival honouring 19th Century photographer Eadweard Muybridge. The illustration and animation graduates, who have all recently collected first class degrees, produced their short film as a tribute to Kingston-born Muybridge on the centenary of his death.

Supported by an electronic soundtrack, the light display combined some of Muybridgeâ€™s best known images with the trioâ€™s own interpretation of his work. Played on a three-hour continuous loop, it attracted large crowds of curious passers-by. â€œMuybridge is best known for pioneering ways to photograph movement, so we really concentrated on animating images related to that breakthrough,â€ Paddy said. â€œIt was an incredible feeling to see our work projected on to such a significant space in the heart of Kingston.â€

The project was initiated by the Universityâ€™s Head of Foundation Studies, Paul Stafford, who is also a member of festival organisers the Muybridge Trust. â€œI was really impressed by the short films produced by last yearâ€™s illustration and animation students as part of their final year projects,â€ Mr Stafford said. â€œI thought the event would be an ideal opportunity for some of those students to showcase their talents to borough residents.â€ Animations produced by Kingston graduates were also screened at the Odeon cinema in October as part of its Muybridge Centenary Film Festival.

Other University staff and students were also heavily involved in festival activity. Promotional posters displayed around the borough were produced by Kingston foundation art and design students. Elsewhere, members of undergraduate theatre company Kudos took to the stage to perform Exposure. The play about Muybridge was written by drama field leader Frank Whately. At the Stanley Picker Gallery, the doors opened on fine art fellow Andrew Carnieâ€™s Muybridge-inspired Slices and Snapshots exhibition, which runs until later this month.