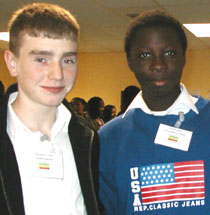 The University's Penrhyn Road campus was the venue for plenty of serious debate when it hosted a United Nations conference with a difference last week. Almost 120 junior diplomats from 15 Hounslow Schools got to grips with the task of discussing major issues affecting Africa. The return of the Benin Bronzes, compensation for the slave trade and the sale of drugs to treat HIV were all on the agenda for the Year 9 and 10 pupils.

The youngsters were all assigned a country to represent and a topic to research. Following an address from MP Ed Davey on the role of the UN, the young delegates took part in a series of debates chaired by politics students. Now in its third year, the conference was arranged by politics field leader Terry Sullivan in conjunction with Hounslowâ€™s Excellence in Cities programme.

â€œThe feedback weâ€™ve had from the schools suggests that modelling a conference on how the UN conducts its business is a very effective way to get pupils to learn about issues affecting Africa,â€ Mr Sullivan said. â€œWeâ€™ve established a good relationship with Hounslowâ€™s Excellence in Cities programme and itâ€™s great to have been able to welcome so many youngsters into the University.â€