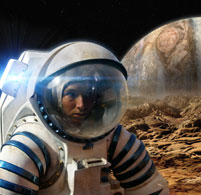 A Kingston University space expert has been reaching out to the stars after lending his specialist knowledge to a major TV drama-documentary. Director of the Universityâ€™s Aerospace Research Centre Dr Chris Welch has been working with the makers of BBC One series, Space Odyssey: Voyage to the Planets, which was broadcast earlier this month. The programme followed the fortunes of five astronauts on a six-year mission around the solar system, exposing some of the dangers they might face along the way.

Dr Welch, a principal lecturer in astronautics, was asked by show producer Chris Riley to advise on technical aspects such as spacecraft design and life support systems on a long-duration space mission. He was also a tutor at the programmeâ€™s specially created Space School, where the cast was put through a course in space flight and exploration. â€œI was impressed by the attention to detail shown by the producers. They were keen to produce a scientifically accurate portrayal of human expedition to the planets, including how the astronauts would grow their own food and even keep fit while in space. I also worked with the producers on the overall design of Pegasus, the spacecraft in the series,â€ he said.

Dr Welch spent two days briefing the cast about different aspects of day-to-day life on Pegasus and answered questions on spaceflight. â€œIt was a privilege to be asked to brief the actors, who previously had no knowledge of astronautics, so they could give a more realistic interpretation on life on board the spacecraft,â€ he said. Dr Welch also featured in a supporting BBC Four documentary, The Making of Space Odyssey: Voyage to the Planets, where he was one of a number of experts talking about life in space.