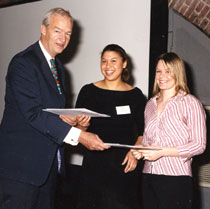 Teams from Kingston University have carried off two of the top awards in the Royal Society for Artsâ€™ Voting by Design competition. Final year students Michelle Adams and Tracey Hare managed to fend off stiff competition to take the second prize while Danielle Bush and Ursula Hill were hot on their heels in third place. The contest challenged entrants to use their design skills to highlight the importance of the right to vote.

Michelle and Tracey received a Â£2,000 award for their entry in which they applied a graduated colour scheme to everyday objects, creating connections between ordinary life and the political processes that influenced it. In one example, they used different shades on a traffic cone to show the way local road maintenance programmes were linked to the Highways Agency, the Department for Transport and, ultimately, central government. â€œWe really wanted to find a way to make the electoral process appeal to young people in particular, so we invented a kind of corporate identity for voting which could be painted on to different objects,â€ Tracey said. â€œSimilar ideas to ours were used in the actual campaign to promote voting and it was really encouraging to know we were on the right track.â€

Third prize winners Danielle and Ursula decided to give the pencil cross used by voters completing ballot papers a new lease of life. They devised a campaign around the theme â€œleave your mark – voteâ€, incorporating the cross into television listings and postage stamps as part of their competition concepts. The pair, who won Â£1,000 for their efforts, took the campaign a step further by also coming up with some novel suggestions about ways people could take part in polls. â€œWe proposed that votes could be made by text message, at cashpoint machines and even at petrol stations,â€ Ursula said.

The panel of judges, which included newscaster Jon Snow, commended both sets of students for their approaches to the competition brief. Danielle and Ursula were praised for the way they had adapted a familiar election symbol. â€œThe notion of using the ubiquitous cross device but reinventing it resulted in a fresh and lively campaign idea,â€ the panel said. The judges meanwhile described Michelle and Traceyâ€™s work as innovative and well thought through.

The prize money was not the only reward for the talented graphic design students. They also found themselves on the guest list for the RSAâ€™s 250th anniversary garden party at Buckingham Palace hosted by the Queen and the Duke of Edinburgh, who is the Societyâ€™s patron.