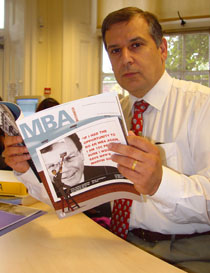 Messages of congratulation have been pouring in from around the globe as the Universityâ€™s MBA course marks its 20th anniversary. Leading business people, academics and MPs have all put pen to paper to praise the programme, which has been responsible for producing a stream of highly-skilled graduates since its launch in 1984.

The plaudits have included a letter from Prime Minister Tony Blair, who paid tribute to the way the programme had expanded internationally through its delivery with partners in Russia, the Netherlands and Greece. â€œI am keen to see more international collaborative links like this, making the experience of British higher education institutions more widely available,â€ Mr Blair wrote. â€œThey are good for the student, good for the institutions concerned and good for business.â€

Course director Ara Yeghiazarian said Kingstonâ€™s MBA had undergone significant growth during the past two decades. From humble beginnings with just 16 students, it had established itself as one of the most respected courses of its kind in the country. â€œOur MBA is distinctive in that we focus on training the leaders of the future,â€ Mr Yeghiazarian said. â€œIt has both an applied and theoretical approach, with a strong emphasis on strategy. At the Kingston Business School we recognise it is more important than ever for managers and firms to think outside the box as they develop the skills to tackle the issues of an ever-changing marketplace.â€

Kingston MBA graduates include ICI director of marketing and sales Phil Kent, management consultant and author Fiona Czerniawska and the Milk Development Councilâ€™s head of marketing, John Taylerson. Mr Taylerson said the programme had provided him with the perfect opportunity to formalise the experience he had acquired during the previous 20 years of his career. â€œThe industry in which I operate requires not only marketing but general management qualifications so the MBA has helped me do my job. Now I am responsible for 23 staff and Â£3 million worth of statutory money available for promoting and widening the market for milk and dairy products,â€ he said.

The Kingston course has also produced two winners of the MBA Student of the Year award, run jointly by The Independent newspaper and the Association of MBAs (AMBA). Angela Jenkinson received the prestigious accolade in 1998, while Moscow-based student Natalia Buchstaber followed in her footsteps last year.

During the past five years, the international appeal of the programme has soared. Associate Dean Dr John Foster said the MBA had now attracted students from every corner of the globe. â€œThey lend a tremendous richness and diversity of experience to the course,â€ he said. Future developments could include taking the programme to India and China.