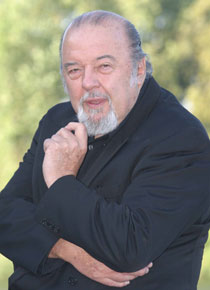 Aspiring actors have undergone expert instruction from one of theatreâ€™s most acclaimed directors. University Chancellor Sir Peter Hall, who founded the Royal Shakespeare Company, shared his knowledge with third year drama students during a two-day masterclass on performing Shakespearean verse.

Sir Peter coached the 25 participants in the techniques needed to read the playwrightâ€™s works and gave them an insight into the skills needed to bring the characters to life. â€œHe revealed how he treated the text in a similar way to a musical score and advised the actors about varying the pace of their speech, pausing and emphasis,â€ drama field leader Frank Whately said.

Student Charlotte Johnson was confident Sir Peterâ€™s tuition would stand her in good stead for the future. â€œLearning when to breathe during long lines was one of the most difficult points to perfect but Sir Peter was extremely patient and very constructive in his comments,â€ she said. Fellow student Rachel Labovitch could hardly believe her good fortune when Sir Peter took time out to give group members individual tips on improving their interpretation. â€œIt was really inspiring to work so closely with a man who is regarded as one of the greatest Shakespearean directors,â€ she said.