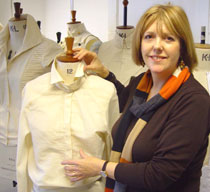 The Department of Fashion has appointed a new course director. Elinor Renfrew, who previously led the fashion degree programme at Ravensbourne College of Design and Communication, has replaced former head John McKitterick.

An expert in childrenswear and womenswear, Mrs Renfrew launched her own label before working for companies such as Babygro and the William Baird group. Her 15 yearsâ€™ experience in fashion education has included a period lecturing at the Royal Melbourne Institute of Technology University in Australia. â€œI like working with premier brands and Kingston is exactly that,â€ Mrs Renfrew said. â€œAs well as being one of the most successful new universities in the United Kingdom, it is also well placed to provide one of the worldâ€™s leading fashion courses.â€

In recent years, the Fashion Department has collaborated on projects with such companies as the Dewhirst Group, Paul Smith and Thomas Pink as well as leading fabric manufacturers Gore-tex, Limonta and Lenzing. Mrs Renfrew, an MA graduate from Central Saint Martins College of Art and Design, said she hoped to build on the courseâ€™s impressive links with industry. â€œThe Department has excellent contacts in such countries as Italy and the United States. However, fashion is a global market and I believe the future of the industry lies in Asia and Australia. My aim is to recruit students from that region, especially Japan and China, and explore links with potential industry and education partners,â€ she said.

Also committed to developing the Universityâ€™s new MA in Fashion Design for Industry, Mrs Renfrew said she was looking forward to helping students realise their career ambitions. â€œI like fashion to be edgy and unexpected but anyone who wants to be successful in this industry needs to be professional and employable. Our aim is produce a stream of high-quality graduates who will distinguish this course from its competitors,â€ she said.