Computing expert on the ball with tennis tactics research

Computing expert on the ball with tennis tactics research 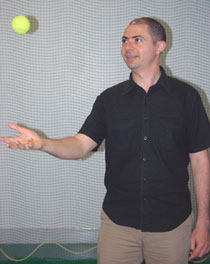 New Kingston University research could finally end years of misery for British tennis by giving players the competitive edge they need to serve up a victory. Dr Ahmed Shihab, from the School of Computing and Information Systems, is developing a computer model that will analyse video footage of tennis champions and allow other players to explore tactics to beat them. Dr Shihab has received more than Â£80,000 from the Engineering and Physical Sciences Research Council for the project.

During the next three years, Dr Shihab hopes to produce technology that will create a computer-generated competitor which rival players can pit themselves against before they take to the court. â€œPlayers and coaches spend a lot of time analysing their next opponent and trying to spot match patterns, player habits and repeated moves,â€ he said. â€œOur technology will allow particular tactics or styles of play to be programmed into computerised players. A player can then set up a simulated game against a computer-generated opponent and get a more realistic idea about how a game might go.â€

Using previous match footage, purpose-built video tracking software will identify the players and their positions. It will track them throughout the game and the information will be fed into predictive models trained to recognise known tactics and strategies. Dr Shihab said the computer models would aim to recognise the difference between attack and defence, allowing rival players to come up with strategies to counter them. â€œThis technology will avoid the need for tennis players to hunt through hours of tape of their opponent. It will also include a search facility to scan for examples of specific tactics or patterns of play,â€ he said.

Although initial research will focus on tennis, Dr Shihab hopes to eventually develop models for more complex team sports such as football and basketball. â€œAs well as helping specialised sports training, the technology could have benefits in fields such as realistic computer gaming, virtual reality and surveillance,â€ he said.